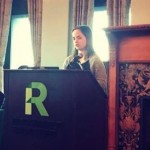 Bernie Sanders has every right to stay in the race, but the longer he stays in, the more trouble he is causing within the party itself, and therefore the greater chance Donald Trump has to be President.

In early May, the Nevada Democratic Convention saw violent outbursts following an announcement that a slight majority of the state’s delegates would be allocated to frontrunner Hillary Clinton.

Some supporters of the Vermont Senator in attendance expressed their displeasure with this by throwing chairs, screaming, and threatening state party chairwoman Roberta Lange.

Sanders response to these violent outbursts from his supporters is more worrisome than anything.

While he condemned it, he did not do much to convince his voters from refraining from it in the future.

The chaos in Nevada led some to predict similar reactions to the National Democratic Convention in Philadelphia come July.

To this idea, Sanders did not dismiss the extrapolation that such ferocity erupting at the convention would be terribly damaging to the Democratic Party as a whole.

Instead, the senator told the Associated Press that the convention could be “messy.”

“I think if they make the right choice and open the doors to working-class people and young people and create the kind of dynamism that the Democratic Party needs, it’s going to be messy,” Sanders said. “Democracy is not always nice and quiet and gentle but that is where the Democratic party should go.”

The messiness that Sanders speaks to here was elaborated on more by the senator himself further.

“So what? Democracy is messy. Everyday my life is messy. But if you want everything to be quiet and orderly and allow, you know, just things to proceed without vigorous debate, that is not what democracy is about,” Sanders said.

This idea sounds nice. But his adage that his candidacy is going to change democracy is a tad overzealous.

He is not a bad candidate by any means, but it is becoming clearer every day that he simply does not know when to quit.

Clinton holds a ten percent lead in California, according to Real Clear Politics.

It is a key state should Sanders wish to stage the comeback he believes he can, but so far it looks as if that is another empty dream just as so many other states quickly became over time.

What gets Sanders and his supporters so angry is their unending insistence that some sort of foul play must have taken place and that it makes for the only possible reason that Sanders is not going to beat Hillary Clinton.

However, there is no real evidence of that actually happening on a scale large enough to make a difference. While it may seem that everyone and their brother is voting for Bernie, the results in many contests throughout the country show us that it is simply an untrue assessment of this race.

Now Clinton is by no means a perfect candidate and it would be unreasonable to expect all Bernie supporters to worship the ground she walks on once she wins the nomination, but the candidate himself citing this election, should it come down to Clinton and Trump, as a choice between the lesser of two evils is troublesome.

That statement along with so many others that have been made over the election will make it incredibly hard for any sort of endorsement of Clinton by Sanders in the future to seem genuine.

Clinton is simply not the lesser of two evils. Electing Donald Trump as the 45th President of the United States would make the country a laughingstock.

His brash and offensive campaign is not indicative of real American values and thus the notion that Clinton is somehow only slightly better than him remains utterly ridiculous.

Obviously Sanders wants to be president, but it becomes more evident every day that that will not become reality.

As he continues to attribute his losses to corruption within the system or other seemingly outlandish claims, it shows that he is unable to come to the realization that his “revolution” simply did not work.

Likewise, the violence that some of his supporters are inciting shows that they too are a part of the problem.

Of course, a majority of Sanders voters are sensible and will vote for Clinton come November even if it is done so begrudgingly.

But the longer Sanders stays in and the more he claims that corruption has persisted because he has lost based in part on rules that have existed for decades, the more fuel it adds to the fire for the Bernie Bros and their Bernie or Bust mantra.

The Bernie Sanders Revolution, if it can even be called that, is not strong enough to make a lasting claim. While he has pushed the party and Clinton herself further left, it remains that that is all will come of his candidacy.

While whether or not the nominating process is fair is a worthwhile debate, there is just absolutely no substance behind the claim that the system is rigged to hurt Sanders in this election.

Successful politicians own up to losses and show an ability to compromise. That is what Clinton did when she lost to Barack Obama in 2008.

She swallowed her pride, accepted the loss, and even took a position in the cabinet of the very man who beat her to realizing her dream of becoming president.

Sanders is not showing an ability to do that here. His attacks on Clinton only become harsher over time, rather than a tad softer as it becomes clear he has no real path to the nomination.

While he cannot give up the values he has attested to so strongly throughout the campaign, he must do what every other runner up has done and show he has a strong enough ego to begin to work with his opponent rather than still trying to tear her down this late in the game.

If the polls as they stand today emulate any results that come out of California on June 7, it will become even clearer that Sanders needs to accept that he will not win the nomination.

But it remains important to his legacy that he does so sooner rather than later so his image as a sore loser can begin to be erased and so that his ideas can stand as his real legacy.

Recently, the New York Times published an article that spoke to the deep divides within the City of Chicago.

Their findings were nothing really new, Chicago is and always has been known as a city that is separated by class, race, and more. However, the stories in the piece resonate so well that it is time that this city stands up and does something about it.

As cops harm the people they are assigned to protect, as a mayor lets a school system crumble and seems not to care, as corruption persists in the state of Illinois in general it is becoming more and more apparent every single day that change is needed.

Calling for these changes is not even close to what could be seen as calling for idealism in a non-ideal world. These changes are necessary for the existence of our city to continue on.

The view from an open window on the 92nd floor of the John Hancock Center in Chicago. Photo Credit: Roman Boed/ Flickr (CC By 2.0)

As a new generation turns into adults, they have the chance to make sure their voices are heard. And it is clear that they are learning to do exactly that.

Now, this is what the national idea of Chicago should look like.

This fair city should not be defined by the violence, but rather by those who are trying so hard to put an end to it.

For every shooting, there are countless people working to stop it from happening again. For every school that is being closed, there are a number of families fighting for it to remain open.

Activism is key to fix what is a broken Chicago and the voices of these activists should be what defines it in a national sphere, not the data on how many people were shot here this past weekend.

But it cannot be the only thing that Chicagoans rely on for real change to actually happen.

Unfortunately, the people of the city had a chance to oust Mayor Rahm Emanuel in 2014.

His opponent Chuy Garcia was a progressive candidate that inspired many in the city, alas, it was not enough and Rahm was given yet another term.

While there is nothing wrong with aligning with Mayor Emanuel’s personal political ideology, he himself is alienating and such a strong part of the Democratic Machine in Chicago and the rest of Illinois as a whole that he presents harm to the city the longer the constituents allow for him to continue being Mayor.

While there are still plenty of people who benefit from the tactics of the current mayor, there are just as many whose very lives falter because of his brash decisions.

He is known around politics to be an abrasive man and that style of leadership does not suit Chicago and its current struggles.

The racism that the New York Times reported on; that people of color have felt while living in Chicago of course will not be fixed by a change in mayor, but electing someone with a progressive mission like that of Chuy Garcia’s will undoubtedly help begin to right the wrongs that have plagued the city for so long.

The young people of Chicago deserve so much better than they are getting now. Photo Credit: Roman Boed/ Flickr (CC By 2.0)

The violence too will not cease until the core problems of unequal opportunity are fixed and it is clear that the Chicago Democratic Machine has no one willing to take on the challenge of seeing that change.

Thus, the power lies within the people to make the change.

If more and more citizens begin to stand up, protest, and go out and vote to make changes for the better, then there will finally be hope for this city.

Until then, when you hear of the violence that goes on in Chicago every week, stop and remember that is does not and should not define the lives of the people here and that for every shooting there are a great number of people giving their best effort to help make it stop.